Way behind with updates but I'm back :)

Title says it all.... I got more and more behind with my blog updates, partially because family matters and partially due to more duties at work. Hopefully will be able to post more models and some other good stuff here.
Just started 2015 hobby show season by attending Old Dominion Open hosted as always by crazy crew from IPMS Richmond. This time the did come ahead of schedule.... Great job guys!
I managed to grab 2 awards from (displayed my builds in 3 categories).... not a bad start....

Time for an update - let's see what can be fixed on SKOT model. Since there is no photo etched set for this kit, all upgrades have to be done from scratch.
Let's start from hatches. The kits has all the hatches in closed position.
I decided to open crew's hatches, since I planned to add figures of driver & commander. I gently cut off existing hatches, using razor saw, and drilled out corresponding holes.

Time for less known and seen vehicle... The OT-64 SKOT is an amphibious armored personnel carrier (8x8), developed jointly by Poland and Czechoslovakia. The first prototype was built in 1959. OT-64 SKOT entered service with Polish and Czechoslovak armies in 1963. It was produced until early 1970s.
SKOT was also exported to Algeria, Cambodia, India, Iraq, Libya, Morocco, Pakistan, Sierra Leone, Sudan, Syria, Uganda and Uruguay. The total number of vehicles produced in different variants came up to 4,500. List of all variants can be found HERE

SKOT-1 model kit from ARMO Jadar (72006) represents earliest, unarmed variant made for Polish Army.  It had crew of two (driver & commander) and could transport up to sixteen soldiers.


Model kit is made exclusively from resin, without any photo etched parts. Instructions sheet is very simplified, so I just skipped it here.

It has been a while since I posted any figure here, so it's time to fix it.
Nicely sculpted limited edition figure from Maow Miniatures - 28mm Necromancer.


I added base from fine sand, some loose bits and piece of bark. Painted with Vallejo acrylics and Games Workshop washes.

Finally, I finished Stug in Polish Army markings, and in time for Northern Virginia IPMS Model Classic 2013. I was also able to complete small vignette for it.
Figures were painted with Vallejo & Citadel paints. Stug was weathered with AK Interactive wash and pigments. 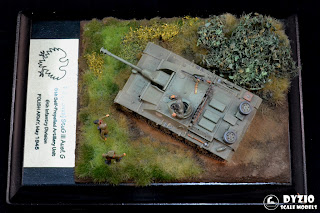 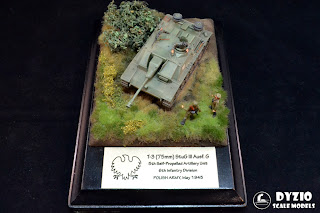 MrDyzio
I've been into scale models since I was a kid. Initially I was focused only on WWII aircraft, but for last couple years I got into AFV models. Sometimes I shift to SF models and figures as well, especially when I need a little gateway from the routine. I hope you'll enjoy my virtual workbench. If you do so, you're always welcome to leave the comment. Thank you.